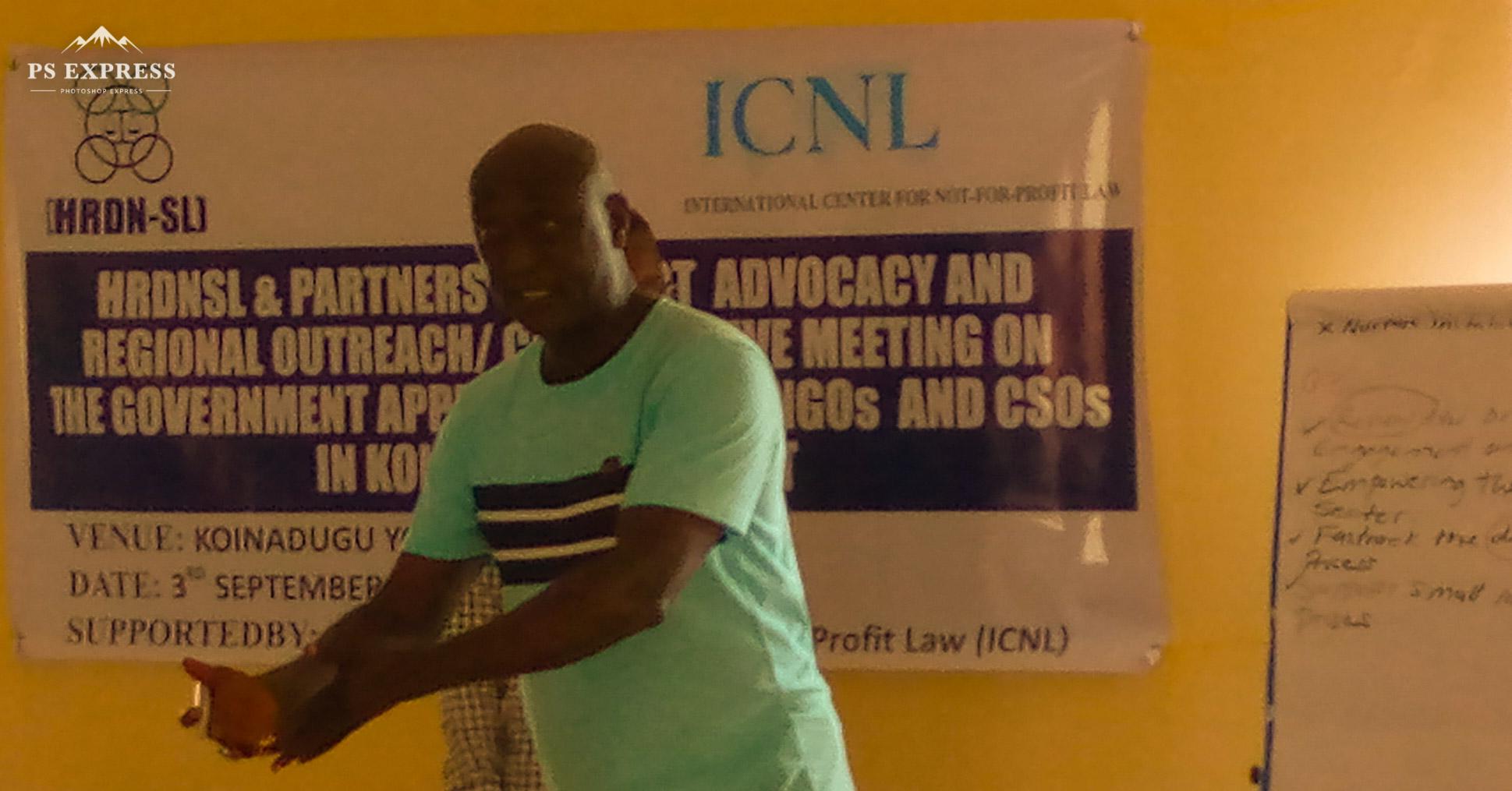 Human Right Defenders Network and their Partners has successfully conducted a two day Advocacy and Regional Consultative meeting on the Governments approved Development Cooperative Framework (DCF) for local council and Community Stakeholders in Koinadugu District, from the 3rd to the 4th September 2019 at the Koinadugu Youth Centre, Kabala.

The two day outreach and consultative engagement gave an overview of the Governments approved DCF, overview of the proposed INGO/NGO DCF, and was rounded up with group discussions, report/plenary and the next step and the way forward in which groups gave suggestions on how to make their voices heard towards the document. The overviews were conducted by members of the Human Right Defenders Network and Partners.

The document among other issues, provided for a mandatory membership of all NGOs with the Sierra Leone Association of Non-Governmental Organizations (SLANGO) and a mandatory administrative structure, which stipulates that 70% of all donor funds to an NGO must be directed to targeted beneficiaries and 30% towards administrative cost.

Members of the Local Council and Community Stakeholders in attendance stated that the process that led to the development of the DCF was not ‘inclusive’ and does not represent the views of the larger NGO groups, hence they decided organized the confab so that they would at the end of the day speak with one voice.

The NGOs also noted that the mandatory membership with SLANGO would violate their freedom of association, while the mandatory administrative structure cannot be feasibly applied to projects.

Mohamed Bangura a civil society activist from WaraWara Bafodia, Koinadudu District was one of the participants present and according to him the document has a Negative side and a positive side.

He said he did not agree with the aspects of the documents that specified the amount of projects (one or two projects) the NGO’s work on as this will affect the rate of employment in the Country as most of the Country’s populations are either directly or indirectly employed by NGO’s.

He said it was unfortunate that the Government wants to control the activities of NGO’s and thanked the Human Right Defenders Network and Partners for bringing the document to their notice as they had no idea that such document was ever in existence.

He ended by pleading with the Government to have a consultative engagement with NGO’s and Stakeholders of the Society to know which clause they agree with and which clause need amendment.

Councilor Zainab Kamara, ward 145 Koinadugu District Council said this was the first time she came across this document to discuss or hear about it.

She said as a stakeholder of the community she has a lot of people looking up to her in terms of developmental activity there the document of this magnitude that has been developed they should be involved at the initial stage of the discussion.

“Am not in total agreement with the document as some aspect of it wants to restrict and control NGO’s, and NGO’s are Non-Governmental Organization that operates to complement the activities of the Government” Kamara said.

The Government can’t address the whole populations need and if this document discourages donors the burden on the Government would be overwhelming she added.

70 – 80 % of the Country’s development is from NGO’s as the NGO’s go to hard to reach areas and if the government wants to add new policy it would affect the country’s growth and beneficiaries of these aid.

Theme by: CodeTrendy | Powered by: WordPress