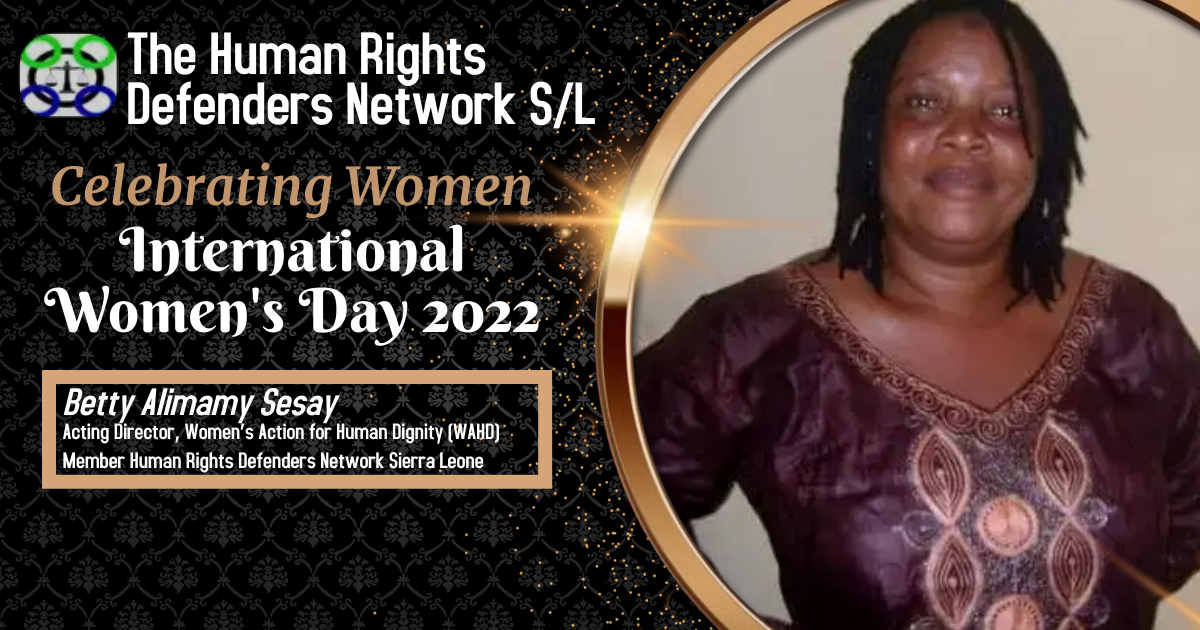 Betty Alimamy Sesay (Mrs) is an advocate and an activist and she also is the Acting Director, Women’s Action for Human Dignity (WAHD) Member Human Rights Defenders Network Sierra Leone. She has been involved in the work of Human Rights for over 20 years now.

Sesay and many other women are just some few case of that show the power of a determine woman and we would to celebrate her on this peculiar day which is the International Women’s Days 2022.

As the theme for this year rightly states “Gender equality today for a sustainable tomorrow” we would like to recognize the contribution of women who are leading the way for a better place for the future.

Sesay in an interview with the Protection and Communication Officer of the Human Right Defenders Network Sierra Leone has this to say….

The child Rights Act of 2007 of Sierra Leone Section 46 (1) prohibited customary practices for children, but there is no specific law criminalizing FGM/C and other harmful practices. This served as a grate setback in my campaign to end child initiation into FGM and recruitment as initiators of FGC. Our usual radio talks reached a community woman whose 11 year old class 3 daughter was forcefully removed from school in December 2021 to be recruited as FGM/C initiator on the outskirt of Makeni, Bombali District.

With support from my organization, we facilitated the movement of the mother and the animator to report the matter to the office which was immediately referred to the Social Service Officer of the Ministry of Children’s Affairs. A letter of invitation was written by the ministry inviting five of the senior initiators the town head responsible for giving receipts as permit, the youth leader, to WAHD office and had an engagement that immediately ordered them by the ministry to remove the child from the shrine and returned her to school as she was writing her class examinations. The girl was temporarily taken to the safe home where she got counselling and later reunified with her mother.  I am always proud to handle issues of human rights abuse using systems and procedures in line with my organization’s safeguarding policies and national laws. Partnership with likeminded line ministries, Family Support Unit of the Sierra Leone Police, Local Council and others to identify, refer, monitor and facilitate issues of children and youth in conflict with societal practices. The 11 year old girl returning to school as demanded by law gives me the zeal and courage to continue doing my work as a women’s rights activist which I am very proud of.

I want to see a society where the rights of all Women and Children (girls) are respected and not discriminated against in education, economic, culture, employment, governance and decision making at all levels.

Theme by: CodeTrendy | Powered by: WordPress